Finally got around to Painting Ruglud's Armoured Orcs. I still need to finish the bases, the banner, and maybe some extra weathering sometime. Rather than paint their armour in the traditional way with blacks and browns (which is the colour of most of my Orc army), I thought I would try something a bit different. 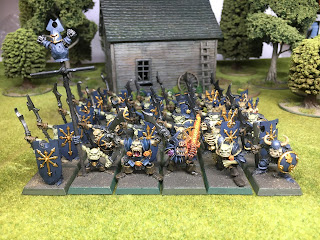 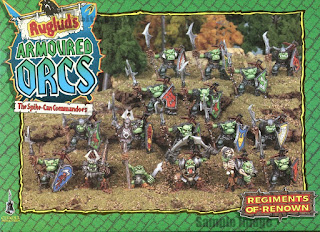 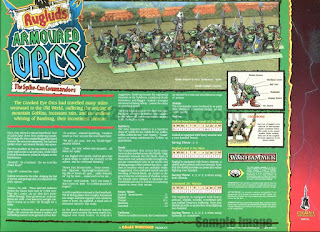 The story on the back of the box describes how Ruglud came across a huge room filled with dead Dwarfs. "Spiky Stunties an' reg'lar ones... wiped each uvver out...". In other words, Dwarfs were fighting Chaos Dwarfs. The Orcs loot the Chaos Dwarf armour. So I decided to paint the armour in the style of Chaos Warriors- would dwarf armour fit an Orc? 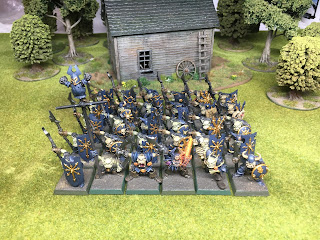 I then had to decide what Chaos faction to paint them: 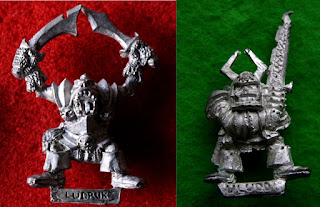 This is a confusingly named regiment, the story states Gudruk is the chief, Ruglud is just an 'Orc hero' so seems to be the Champion. I'm not surprised by how many people get the models mixed up. The stat line says "Gudruk is equipped with heavy armour and a two-handed sword." and "Ruglud is equipped with heavy armour, a shield and is armed with two swords."
This is contradicted by their names being stamped on their slotta base tabs - see above (well Ludruk and Ugludd- but it's close enough).
In addition the story on the back of the box describes how Ruglud gets his head stuck in a Chaos Dwarf helmet. "The tribe feasted upon Goblin-flesh long into the night - all except for Ruglud, who couldn't get his helmet off, and was reduced to sucking broth through a straw." Which also explains his face being all squashed up.
But just to add to the confusion the end of the story also states "As the gear's discoverer and the bravest, meanest and certainly the most stupid Orc, Ruglud was made leader." So does this mean Ruglud was supposed to be the higher level hero and therefore the leader all along?
Either way, because of the slotta tabs and the story stating that Ruglud is wearing a helmet, I'm certain that Ruglud is the model on the right with the helmet on. 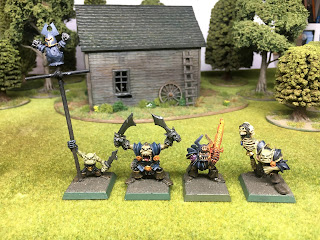 Finally the command group characters. From left to right- Maggot (Gudruk's offspring and standard bearer), Gudruk (the leader), Ruglud (champion), and Bambrag (musician on the xylobone and whiny, cowardly shaman).
I think I may have overdone the glow on Ruglud's sword, but it was my first time trying this technique. I plan on adding a banner later on. It will be made up of two ripped banners. The top half will be Dwarf, the bottom half will be a Chaos Tzeentch banner, all crudely stitched together. Probably add some Goblin trophies as the units battlecry is "Gobbo fer tea, Gobbo fer tea, Gobbo, Gobbo, Gobbo fer tea!"
I hope you like them!
Posted by Mordin at 1:16:00 pm

The origins of the blog's name